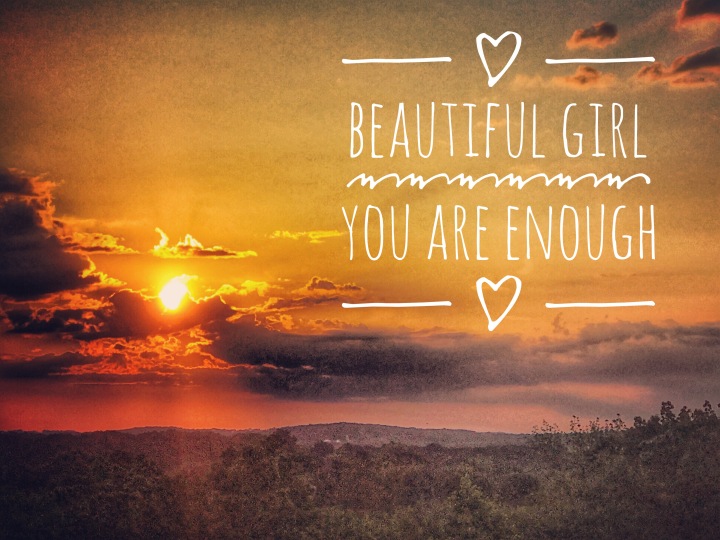 Repeat after me: I am enough.

Many of us battle demons, past and present, that constantly try to tell us that we’re not good enough. These demons manifest themselves through a myriad of experiences in our lives that make us feel like we’re not worthy. And when things seem to be falling apart, those thoughts and feelings take over. This happened to me recently.

I’m a 41 year old single mother. Divorced for nearly 5 years, I decided several months ago that it was time to take the plunge into the dreaded online dating scene. Anyone who’s been there knows what I mean when I say “dreaded”. It sucks. I went on countless first dates, a handful of second and third dates, but nothing that ever turned into any kind of meaningful relationship.

And then a little over a month ago, it happened. I met him. He was everything I wanted – smart, funny, kind, caring, strong but gentle, and good looking. We shared common interests. He had a successful career. And most importantly, he got me. Isn’t that what we all hope to find? Someone who just gets us? It sounds so simple, but it’s huge. And he got me. We had a whirlwind romance. The kind you read about in books, spending every moment that we possibly could together. I was so happy. Everything was great, until it wasn’t. Until the unraveling of it all. And then it was over. Just as quickly as it began, it ended.

I was crushed. Devastated. You know the feeling. We’ve all been dumped before. It didn’t take long for the self loathing to set in. What did I do wrong? There must be something wrong with me. Obviously, I wasn’t good enough for this man. That’s my demon. One of them, anyway. I put too much weight on what other people think of me. Or rather, what I perceive they think of me. I imagine others have similar demons. But when someone else rejects you, it’s not about you. It’s about them. It’s about a need within themselves that isn’t being fulfilled. And that has nothing to do with you. Not one single thing. Nothing. It’s really important that you get that. It’s also important to understand that other people’s opinions of us don’t matter. And I don’t mean that disrespectfully. I mean that in the most self loving way possible. Your value, your self worth, comes from a place deep inside you. You just have to cut through all the muddle and find it.

Our demons do not define us. They are merely obstacles on our life path. When we are faced with these demons, we have two choices. We can try to avoid them. Or we can push straight through them to the other side. Avoiding them is only a temporary fix. They’ll still be there, hovering in the dark. Waiting. But if we push straight through the center of them, that’s where we’ll find the lessons to be learned. That’s where the good stuff’s at. It’s not easy. In fact, it hurts like hell. But that’s where you’ll see that you are strong, and brave, and smart, and beautiful, and so worthy.

So say it: I am enough. Say it and believe it. Believe it even when it’s hard to believe. Believe it still. Because it’s true.

You alone are more than enough.